by tapes and topographies 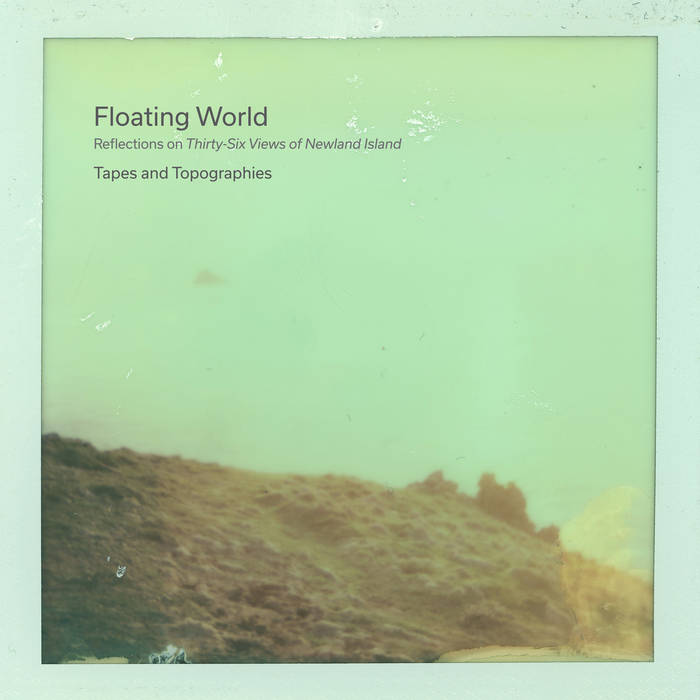 ‘Floating World’ is an album by US based artist Todd Gautreau, who records as Tapes and Topographies. It was created in response to a collaboration project called Thirty-Six Views of Newland Island with British artist Jonathan S Hooper. The album follows last year’s ‘Amplitudes’ and is another entry to Todd’s discography, alongside music on labels such as Past Inside The Present, Dronarivm, Shimmering Moods and his own Simulacra Records.

Jonathan S Hooper is a mixed-media artist based in London, who works with paintings, photography, sculpture and film. Thirty-Six Views of Newland Island is an evolving multi-factorial project in which Hooper continues his exploration of ontological concepts of time and space through the landscapes of his native Cornwall. Specifically, the project focuses on a small uninhabited outcrop called Newland Island, which lies just off the Cornish coast in the Atlantic Ocean’s most westerly margins. The project’s title is inspired by Katushika Hokusai’s series of woodblock prints of Mount Fuji, drawing in Hooper’s broader interest in Japan’s artistic heritage. It also adds to the cultural connection between Cornwall and Japan first established in St Ives, in the 1920’s, through the collaboration of master potters Bernard Leach and Hamada Shoji. A collaboration that continued through much of the twentieth century.

A particularly fascinating consideration is that Mount Fuji is an instantly recognisable geographic icon, yet in contrast, Newland Island is unknown to most. This frees the project from the limits of preconception, opening up opportunities to explore further ideas of landscape, and our place within it. Through collaboration with Gautreau (who is based some 5000 miles away), Hooper sought to give creative licence to a composer, in order to encourage another viewpoint. He had first discovered Todd’s music through Elizabeth Alker’s BBC Radio 3 Unclassified programme, and subsequently reached out to invite him to work on a soundtrack, which has now become ‘Floating World’. He sent photographs of his paintings, scans of the polaroids and his studio notes; the work developed organically into a collection of nine soundscapes, in which Hooper sees as independent views of Newland Island in their own right.

Hooper will be working to share this project through galleries and installations and we felt it was apt to assign full creative control over the CD packaging design to these two artists. Todd, also a graphic designer, has pulled together some of the polaroids for the outer and inner sleeves. There is a 16 page booklet included, which contains paintings, further polaroids and text from both artists. This is also included with the digital version of this album.

The Hammer and The Relentless from the Boston band Malleus stop by for a chat.